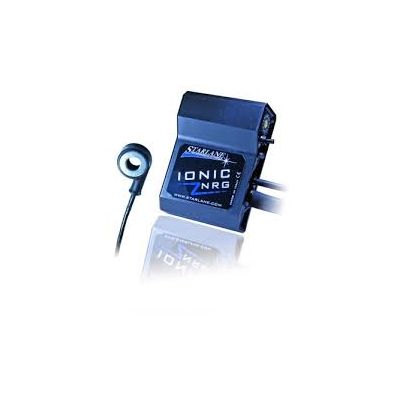 IONIC NRG enables the driver to engage the gears without using the clutch and when the throttle is completely open.

The advantage for the driver results in extremely short shift times, but above all in perfectly keeping the motorbike attitude in acceleration at the exit of corners since no pitch and loss of traction is triggered by the closing and reopening of the throttle. 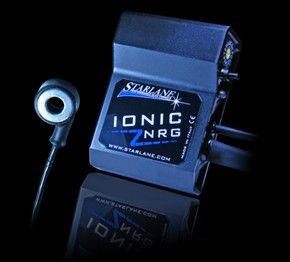 At any shift of gears, the lever is subject to the energy of the driver’s action. The sensor constantly conveys the energy of the stress it is subjected to the central unit that will power off the engine for some milliseconds (typically 40-50) after having reached the value set up by the user.
The short power off time is enough to engage the gears while keeping the throttle completely open without acting on the clutch.

The dynamic engine RPM management is based on a software algorithm which automatically adjusts the cut-off time, this allows to obtain optimum smoothness at low RPM with the maximum precision and shifting speed at high RPM.

IONIC NRG uses the new NRG sensor, which is the result of Starlane’s 13-year experience in conceiving and accomplishing solutions intended to detect the shift of gears, which has induced important Italian motorcycle industries, as leaders in the World Superbike Championship, to use Starlane
shift sensors on their own official motorbikes.

The miniaturised NRG sensor is intended to detect not only the simple shift, but a signal proportional to the intensity of the driver’s action on the lever and pattern rod. This solution can provide for an extremely valid and accurate system without fastening to the engine or the chassis any counterpiece or spring adding troublesome clearances to the leverage.
This means that it is not sensitive to the lever vibrations and oscillations due to the asphalt roughness as well as to the lever shift due to the involuntary action of the driver’s foot.
This result can not be achieved by the common systems on the market, which detect the simple lever shift by means of linear sensors or complete with a microswitch because characterised by a very low accuracy level.

The sensor is monolithic, composed by one single piece without any movable part. It is not subject to any wear effect.

Why the new NRG system is so revolutionary, safe and profitable:

1) The new sensor can be universally installed in just a few seconds on all motorbikes.

2) The sensor always remains in the most protected area in case of CRASH.

3) Any impact against the curbs that may bend or damage the lever lengthwise and make any other solution inefficient is unable to have any effect on the NRG sensor operation.

4) One single article can be used on all Road, Supermoto, Enduro and Cross motorbikes. If you change motorbike model, you can keep the same IONIC NRG Kit for the new one.

5) It acts in both directions, even if it is not required by the downshift, this makes it really universal.

The NRG sensor is shaped (washer shape) and sized (small-size) in such a way that it can be installed on all motorbikes in just a few seconds without mechanically changing its original members. This makes it completely universal. 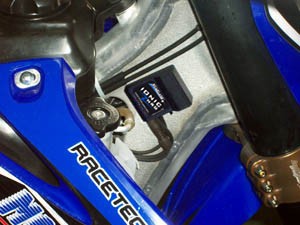 For Aprilia RSV4 is available the specific kit (code IONRGRSV4) as the universal version is not compatible.

Content of the package for IONIC NRG (COD. IONRG):

FREE SHIPPING TO AUSTRALIA ON ALL PRODUCTS

Let's get in touch